At less than 1 second past midnight on the 31st December a new decade will start!

What will this decade hold for you and I?

2021 will begin with ….   The final transition to Brexit and all that will hold for us.

We shall still be in the clutches of the viral pandemic of Coronvirus Covid 19, but we do have vaccines being implemented now. However new strains are appearing which are causing more disruption and the UK like other countries are in almost full lockdowns.

In the USA Donald Trump (Republican) is about to leave the Presidency and Joe Biden (Democrat) will replace him. How this will change the world geo politics is yet to be seen.

“A recent Mckinsey report – The Covid-19 recovery will be digital stated ‘Recent data show that we have vaulted five years forward in consumer and business digital adoption in a matter of around weeks.  Banks have transitioned to remote sales and service teams and launched digital outreach to customers to make flexible payment arrangements for loans and mortgages. Grocery stores have shifted to online ordering and delivery as their primary business.  Schools in many locales have pivoted to 100 per cent online learning and digital classrooms.  Doctors have begun delivering telemedicine, aided by more flexible regulation.”

In 45 B.C., New Year’s Day is celebrated on January 1 for the first time in history as the Julian calendar takes effect.

1st. Well, of to a good start. In the middle of the night mum fell and wounded her arm badly. Paramedics came and patched her up and gave her a talking to about her blood pressure and swollen legs! Of course she will not change her lifestyle. At 92 would you.  “We would prefer that she does not go to hospital, it’s not nice there at the moment” Happily the rest of the day passed with no mishaps.  Ordered plug in night lights for the landing.

2nd. A beautiful clear sky, however just heard on Radio 4 that we may get another ‘Beast from the East’, I hope not. The District Nurse arrived at about 1.30 and changed the dressings on mums arm. Thanks again to our NHS and the great staff.  The threatened snow did not appear.  Took some photos of jacket Potatoes for one of my clients as part of an ongoing project to photograph all of their dishes served in the restaurant.

3rd. Excitement ! expecting a delivery from Amazon, a light for the landing and a large digital clock/calendar, a visit from the nurse again. Busy editing the photos taken yesterday whilst listening to BBC Radio 3.  The big news is of course the Coronavirus and in particular whether schools should be open. It seems pretty obvious to me that they should not. I Woke at about 1.45 am in the night with blood pouring! from my right ear, A large red patch on my pillow phoned 111 the doctor did not seem too concerned. Now deaf from congealed blood and need syringing. So little sleep again. Hopefully not a sign of a more serious problem.

5th. My birthday! 69 OMG. 1st day of new full lockdown. At last the government has decided that schools must close. The transition is almost complete, just one physical card and 13 online Birthday wishes. Nurse visited to change mums dressing. An uneventful day.

6th. Its cold and wet so not much walking or photography today. The arguments about schools being closed continue and mostly they are based around something other than the good of the child. Highlight of the day Collect my drugs! Still have a loss of hearing in my right ear, but I think it is beginning to return.

7th. News flows in from the USA about Trump supporters storming the Capitol “US lawmakers have certified Joe Biden’s election victory, hours after Trump supporters stormed the Capitol in an attack that saw four people die. One woman was shot by police, while three others died as a result of “medical emergencies”, officials said. The mob, which had been encouraged by President Trump, stormed the building in a bid to overturn the election result, suspending a Congress session.” Worrying times for America and democracy.

8th. Cases of Covid 19 continue to rise at alarming rates as do the death rate. Hospitals are reporting that they are at full capacity. It is quite clear now that the Christmas celebrations have boosted these numbers, a heavy price to pay for seeing your family if you end up dead!

10th. At last a lovely walk around Ravensthorpe Reservoir in the thick mud. At one point the mud came half way up my Wellingtons.  I have not been here for some months, it was good to return. Highlight of the walk a Goldcrest (horrendously difficult to photograph in poor light conditions). I did get a great shot of a friendly Robin. Also saw a Tree Creeper and Golden Eye male and female, whilst a Great Crested Grebe caught a small fish. 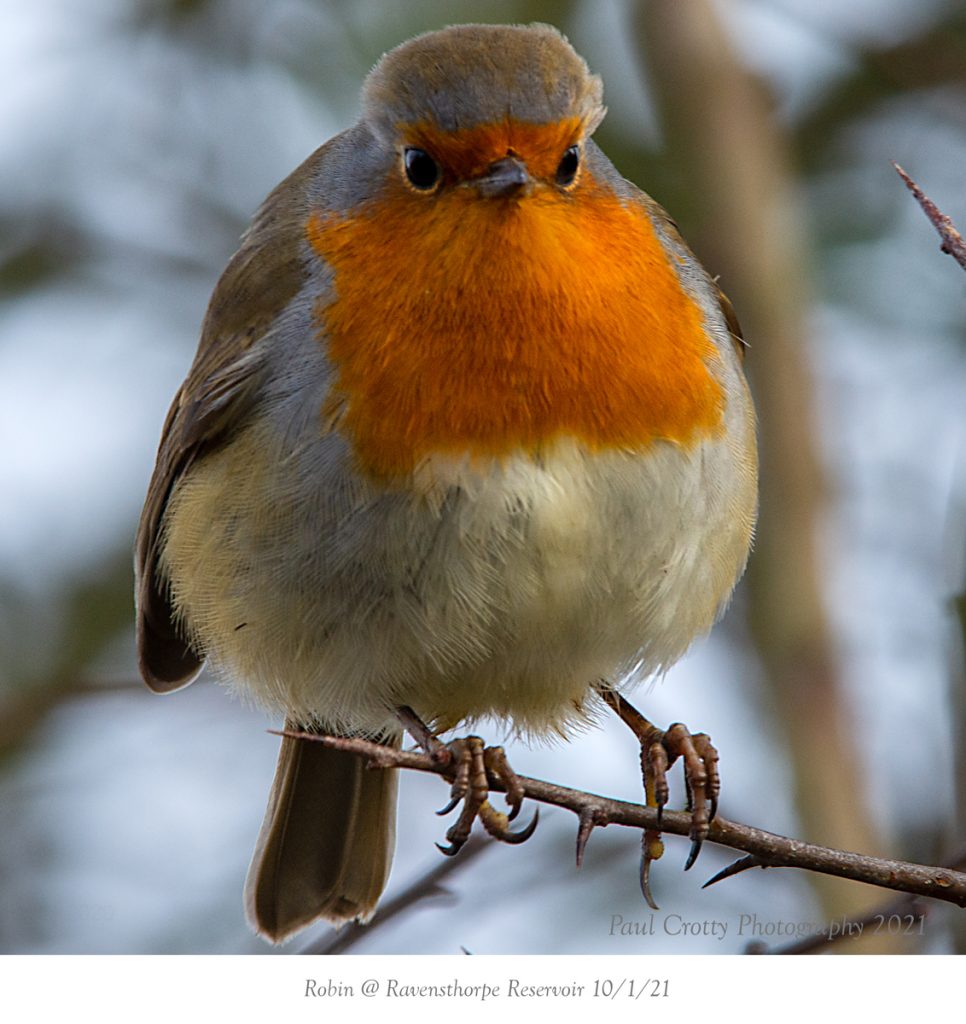 As I drove home noticed huge numbers of cars parked up, with all the individuals in Harlestone Firs, still you can socially distance in there. So I spent most of the afternoon editing the images. Now listening to Words and Music BBC Radio 3 about Plastics.

11th. Ended my course of antibiotics, edited photographs and listened to lots of radio.

In the evening watched a movie ‘Jupiter Ascending’  Directed by Lana Wachowski, Lilly Wachowski. With Channing Tatum, Mila Kunis, Eddie Redmayne, Sean Bean. The Wachowski Brothers (now sisters) were responsible for the trilogy The Matrix (perhaps one of the greatest science fiction films so far.)

“Lana was born Laurence Wachowski in Chicago in 1965; Lilly was born Andrew Paul Wachowski two-and-a-half years later, in 1967. Their mother, Lynne (née Luckinbill), was a nurse and painter. Their father, Ron Wachowski, was a businessman of Polish descent. Their uncle is the actor and Primetime Emmy Award-winning producer Laurence Luckinbill. They have two other sisters: Julie and Laura.  Julie was credited as assistant coordinator in the film Bound; she is a novelist and screenwriter.

The Wachowskis attended the Kellogg Elementary School in Chicago’s Beverly area, and graduated from Whitney Young High School, known for its performing arts and science curriculum, in 1983 and 1985, respectively. Former classmates recall them playing Dungeons & Dragons and working in the school’s theater and TV program.

Lana went to Bard College in New York and Lilly attended Emerson College in Boston. Each dropped out before graduating, and they ran a house painting and construction business in Chicago.

Beginning in 1993, they wrote several issues of Ectokid for Marvel Comics‘ Razorline imprint (created by horror novelist Clive Barker), which were credited to Lana. They also wrote for the series Clive Barker’s Hellraiser and Clive Barker’s Nightbreed for Marvel’s Epic Comics imprint.”

12th. Updated ’81 Hamburger Heaven Takeaway menu and uploaded it to the website which I built and maintain. At the outset launch day we had 4000 page views!

Later today I have to travel to Heathrow Airport Term 2 to collect a friend returning from Ireland. After lunch I went to Ravensthorpe Reservoir to walk through the mud! Very few birds visible and once again My telephoto lens has broken, the auto focus feature is not working, turning out to be an expensive lens.

The trip to Heathrow went very well, very little traffic on the roads. ‘Flight Radar’ is fantastic. It allows you to actually see the aircraft take off and then you time your journey to arrive on time. Which is exactly what happened, as I exited the lifts at Terminal 2 Olive was walking out of the terminal building.

13th.  After the excitement of my trip to Heathrow a quiet day. Listened with interest to the developments in the USA over the impeachment of Donald Trump.

14th.  Trump is impeached. Will the Senate vote to enact the impeachment?

Car in for MOT. It is raining persistently so got a Taxi home. I normally walk. Passed. Created a mind map on the subject of Synaesthesia following a program on BBC Radio 4. So interesting. Imagine when you hear a word you ‘see’ a colour.! ” Our understanding of reality comes from how we perceive the  world around us. “

15th.  An early visit from the nurse to change mums dressing. The wound is healing well.  Delivered my 500mm lens to Skears for repair.

16th.  Telephone call to invite mum for her Covid vaccination.

Had a waking dream, not nice. I became awake in the middle of the night, hovering above me, mum, pure white with a glow around her and holding a small bunch of flowers in her hand, very vivid. I let out a sort of scream and became fully awake heart pounding and sweating. Very scary, I half expected to find mum dead in her bed. Luckily it was a dream. I often ‘see people’ hovering in the room, and have done so since being a small child. (Apparently it is Sleep Paralysis!)

18th. Shopping at Sainsbury’s. Someone tries to enter without a mask, guess what, Eastern European! Paid car tax and Insurance for car ouch! The rest of the day passed without event.

19th. There is a distinct lack of birds in the garden, and it has been so for some weeks now. The Robin and the Pigeons are the only regular visitors with the odd Blue Tit.

The accumulation of bad weather and other circumstances has kept me indoors for some days now, I am finding it very testing. It is not an ideal situation for me, I like to be out and about!

22nd. Virtually no sleep. 1st thing walk to doctors.  Swabs taken and strong antibiotics prescribed along with some olive oil drops. Apparently the antibiotics will make me nauseas and give me Diarrhoea, something to look forward to I guess.  Walk home. Walk to shop to get mum’s pension. So by 10.00am have nearly done my daily steps.  At last some sunshine. It is cold but nice.

23rd. We are now several weeks into the Governments vaccine program and approx 5 million people have been given it. Sadly the death rates are high  averaging over 1000 a day!

I am not feeling too good,  the effects of the new antibiotic I guess. My ear is not itching so much though, so hopefully progress is happening.

24th. What a night. Eventually got to sleep at about 3 am. A side effect of the anti biotics I am on. Feel like sh*t now.   It is now 10.40 and I am sitting working ( well doing my online tax return and a valentines menu for a client ) whilst listening to an amazing mix by Mary Ann Hobbs  ‘Ambient Focus’ featuring  bands and players like Underworld, Alice Coltrane, the Deftones and Erland Cooper. Outside it is snowing heavily the roads and grass are now white. The first for us this winter.

25th. Repeat of almost sleepless night. The anti biotic tablets are the culprits, only 3 days left. Throughout my sleepless nights I have been watching the BBC program from 2013 ‘Fall’. What an incredible study of the psyche of a serial killer and ‘normal’ people, made better by the acting and direction. It is one of those programs that makes you want to watch the next episode. It has clichés, some questions not answered, but what you realise is that there is no normal! we all have a variety of fantasies, fetishes and needs.