“The Bempton Cliffs reserve, on the spectacular Yorkshire coast, is home to one of the UK’s top wildlife spectacles. Around half a million seabirds gather here between March and October to raise a family on towering chalk cliffs which overlook the North Sea.” 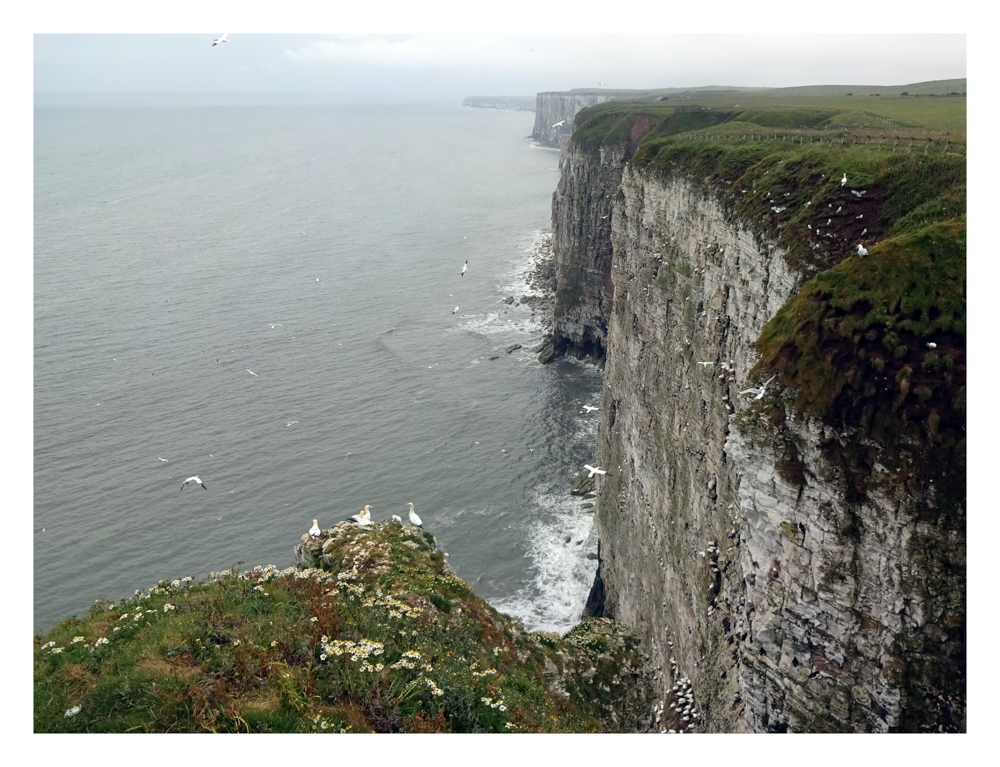 The urge to visit Bempton got the better of me. The BBC weather suggested sunshine and showers! so I decide to go. I leave a  rainy Northampton at 7 am and take the gentle 170 mile journey listening to the radio.  I arrive at exactly 10 am. 3hrs.

At Bempton it is raining heavily and the sky looks foreboding, not a good start. I settle in the car, have breakfast and listen to the radio (again) . Slowly but surely the rain eases. I decide to make a go of it and put on my boots and wet gear with camera wrapped in a plastic bag. just a few yards from the visitor centre a Linnet is posing for me so out comes the camera. It is almost immediately wet. get the photo, dry off the camera and put it back in the bag. This is going to be fun.

The walk to the cliffs is short. What a sight to behold hundreds and thousands of seabirds flying around and to and from the sea with food or nesting material. It is proving difficult to keep the camera dry, but I must! get some images. 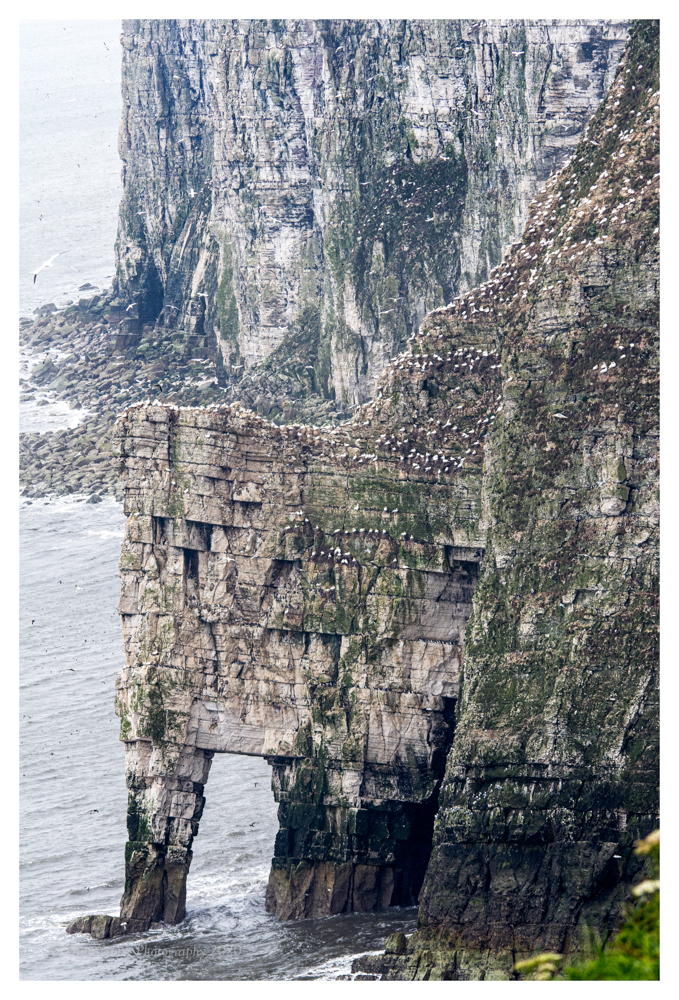 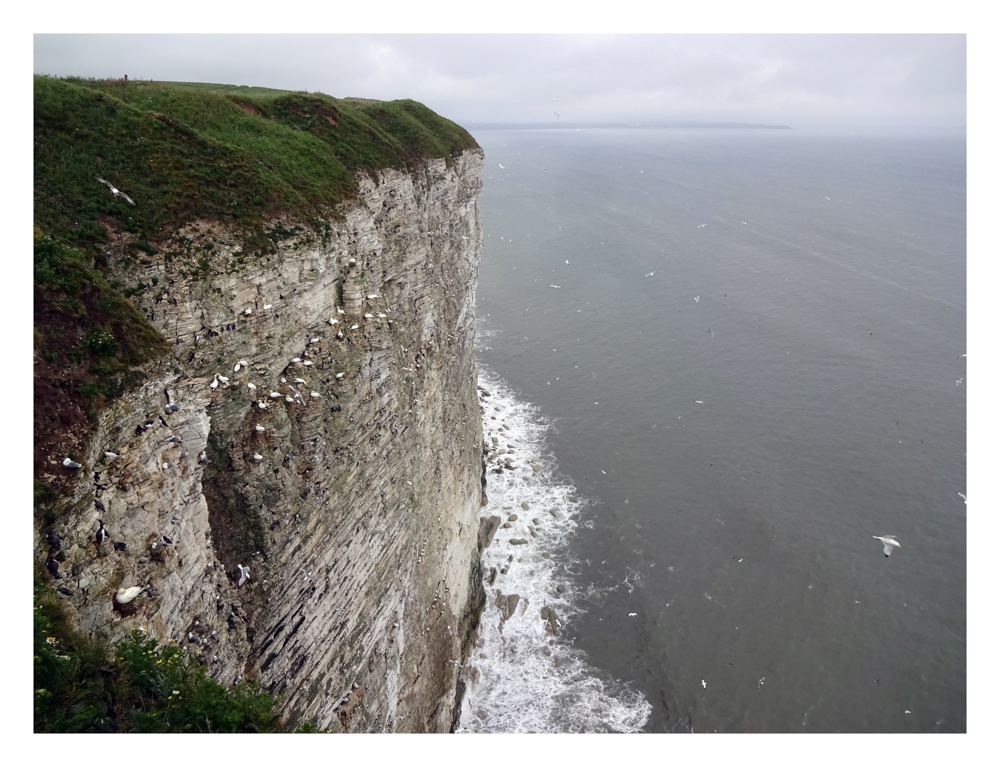 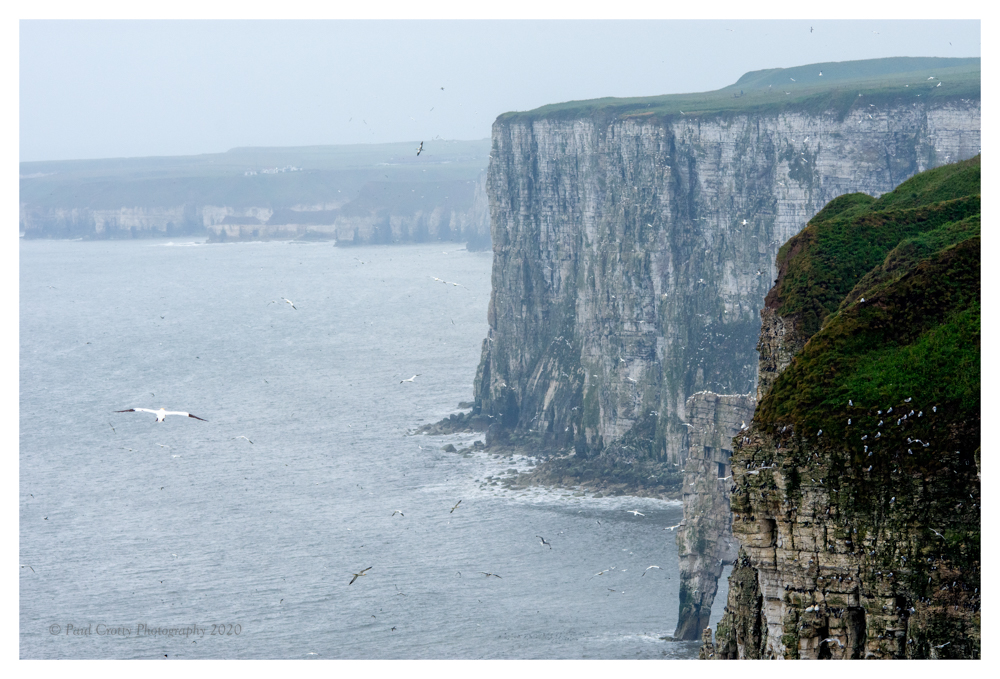 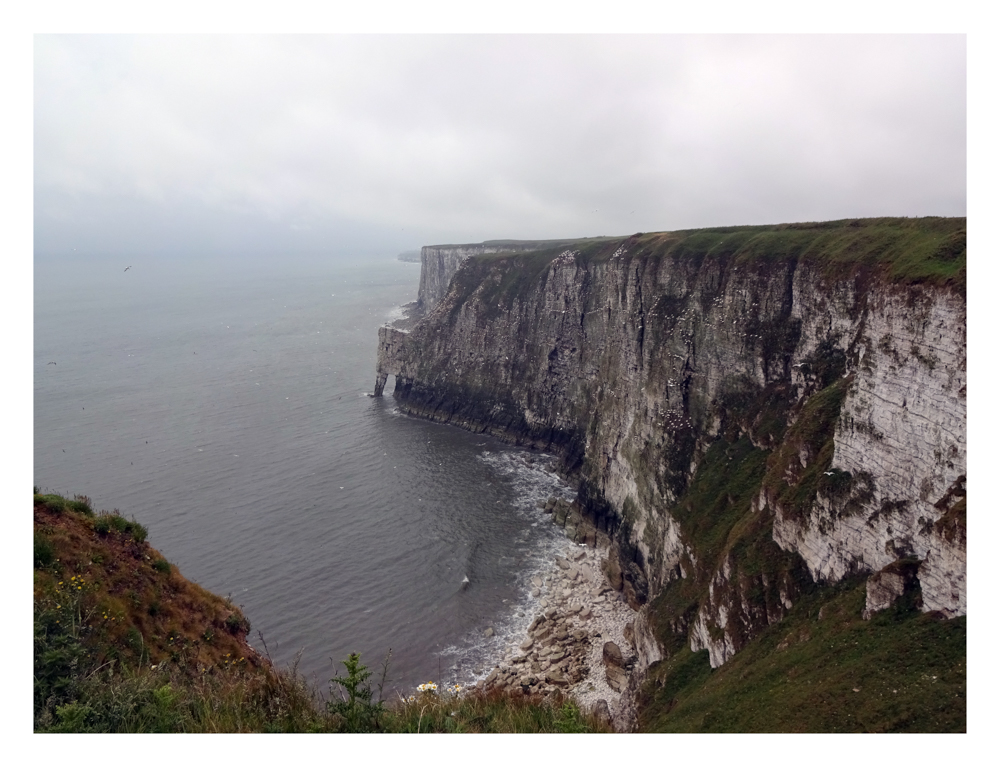 To start I move of to the left and walk in the direction of Scarborough along the cliff tops towards the next viewing platform. By now I have seen Guillemots, Razorbills, Kittiwakes and lots of Gannets, even a glance of a Puffin.

Even now I still struggle to understand how these birds cling to these sheer cliffs and even the smallest ledge is enough for a perch. It must be so difficult when the wind is really strong.  Looking more closely and you can see nests have been built on these sheer walls of chalk. If the chicks fall out they have a long fall. Incredible. On top of the cliffs are huge empty spaces where they could nest with shelter, no! they still use the cliffs.

Basically you do not know which way to look with so much activity around you. Huge numbers of Gulls are gathering nesting material from the fields, Gannets suddenly appear cruising along the Cliff tops. In the distance a Skylark is singing. As you walk along the path Sparrows suddenly appear on the fence posts and quickly dive back into the undergrowth.

The views are spectacular, even with the bad weather, but by now the rain has almost stopped. Scarborough is just visible in the distance.  As far as you can see birds are clinging to or flying near the cliffs, amazing, and the smell! wow it takes some getting used to. I can still smell it now 1 day later.

After some time I decide to turn around walk back toward the centre and then along the cliffs in the other direction towards Flamborough.

I suddenly realise that I have not seen a Fulmar yet, they are clearly not so numerous as the other species. So I look out for one, eventually I spot one, great.

Move further along the cliff. A Crow flies up over the cliff top with an egg in its bill hotly pursued by a Gull, and shortly after this I find a Guillemot egg on the path, probably dropped by a nest robber. Shortly after this another egg freshly dropped and the contents eaten, this time a Herring Gulls egg. 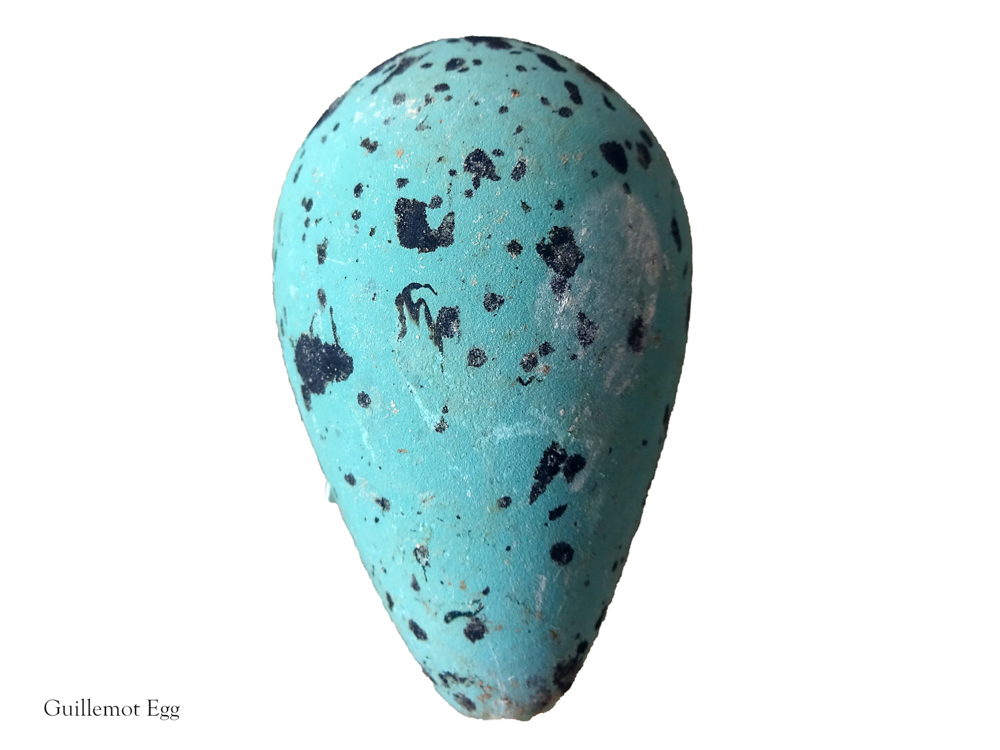 At last I find a group of Puffins reasonably close to be able to get some good shots, which makes my day. Apparently at this time of the year they are nesting a sit in their borrows for long periods.

To the right is meadow like ground with Skylarks, Sparrows and Meadow Pippits visible, with Linnets also on the cliffs looking for food.

By this time I am getting tired so stop and take in some fuel and a drink, rest my legs and watch the birds. The sun has even come out and is pleasantly warming, on the cliff tops the wind makes it feel cooler than it is.

Now Swallows are flying low over the meadow like area! Stop and try to get some shots. However the sky is darkening and spots of rain are starting to fall. Time to head for the car.

Just as I reach the centre it begins to rain rather than spot. Change out of wet weather gear and sit in the car to each lunch (at 3pm). Once rested and ready I start the 3 hr journey home.

I will return in better weather, what a fantastic day. I highly recommend you put this on your list to visit, more so if you have never seen this kind of spectacle before.

Something to note about going in poor weather, you have the place to yourself more or less. I think I saw about 10 people all day and one of those was a RSPB worker. 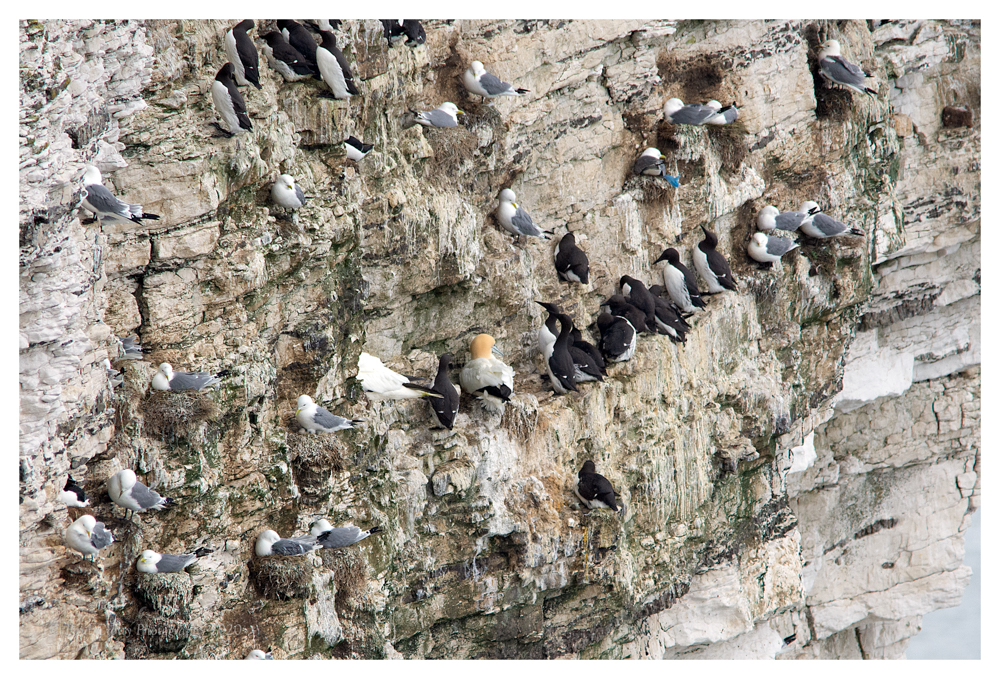 Take some time to study this image.
Notice how precarious the nests are not to mention the small amount of room each bird has.
Gannets are big birds but still manage to find a spot.

In the images are Kittiwakes, a Gannet and Guillemots. 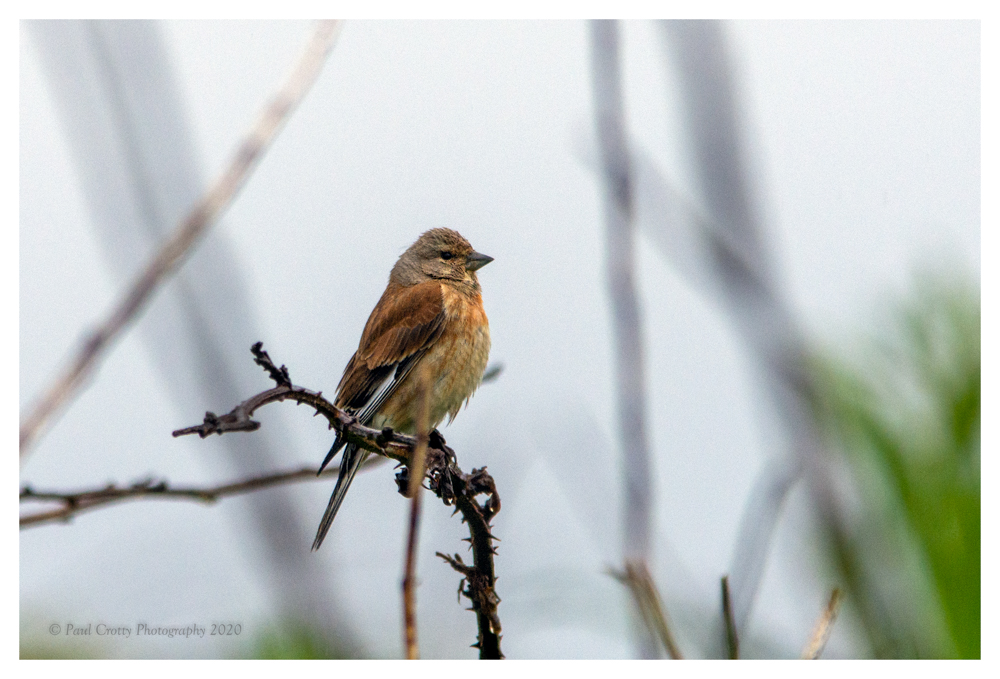 The 1st photo of the day, very close to the visitor centre –  a Linnet. 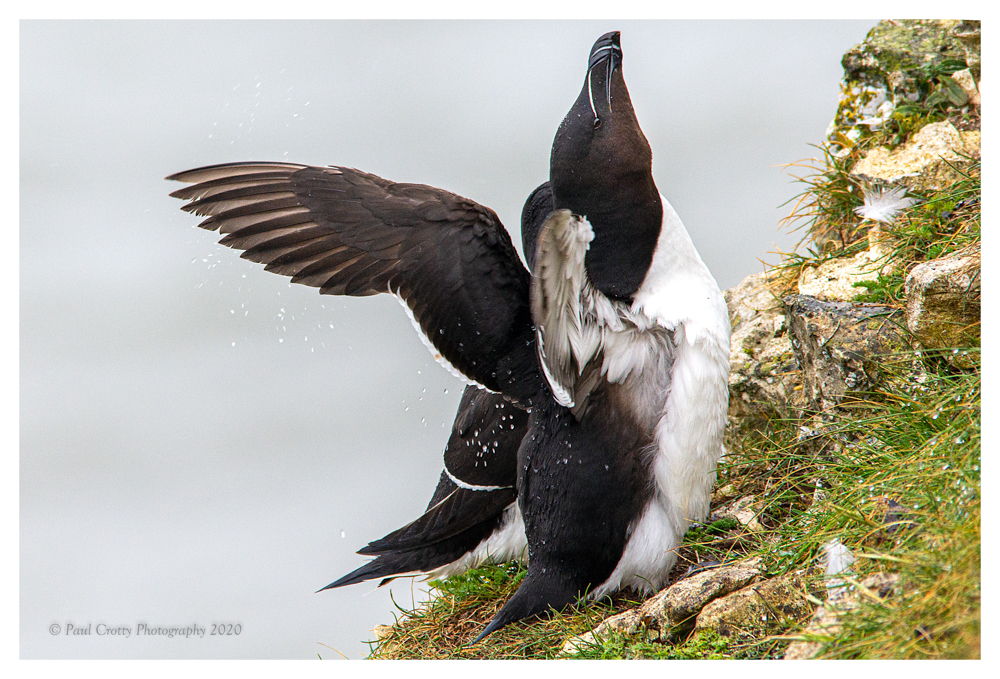 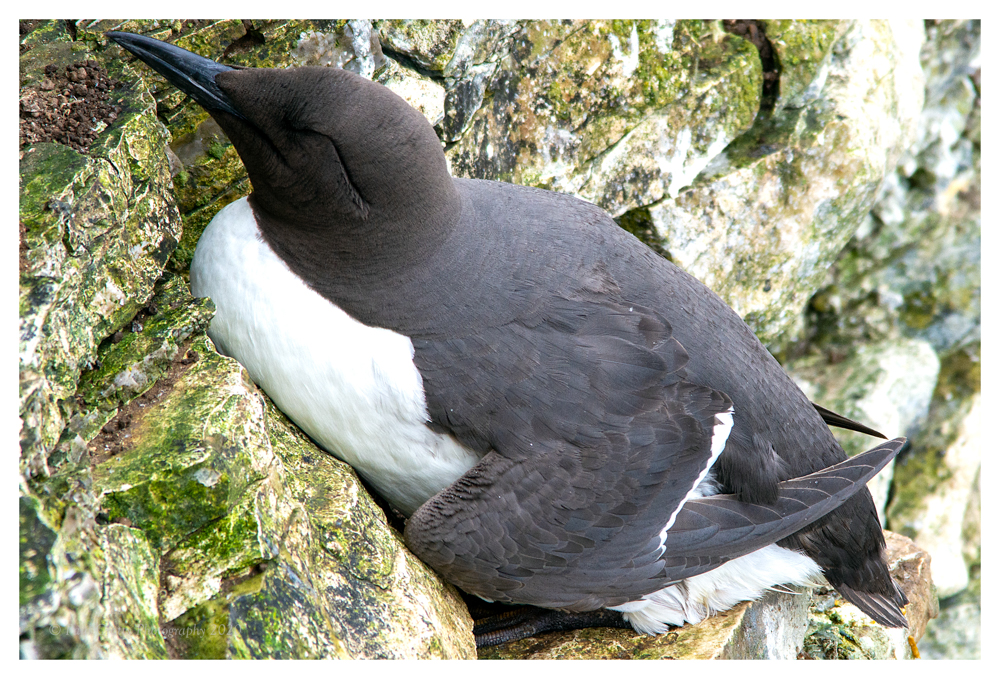 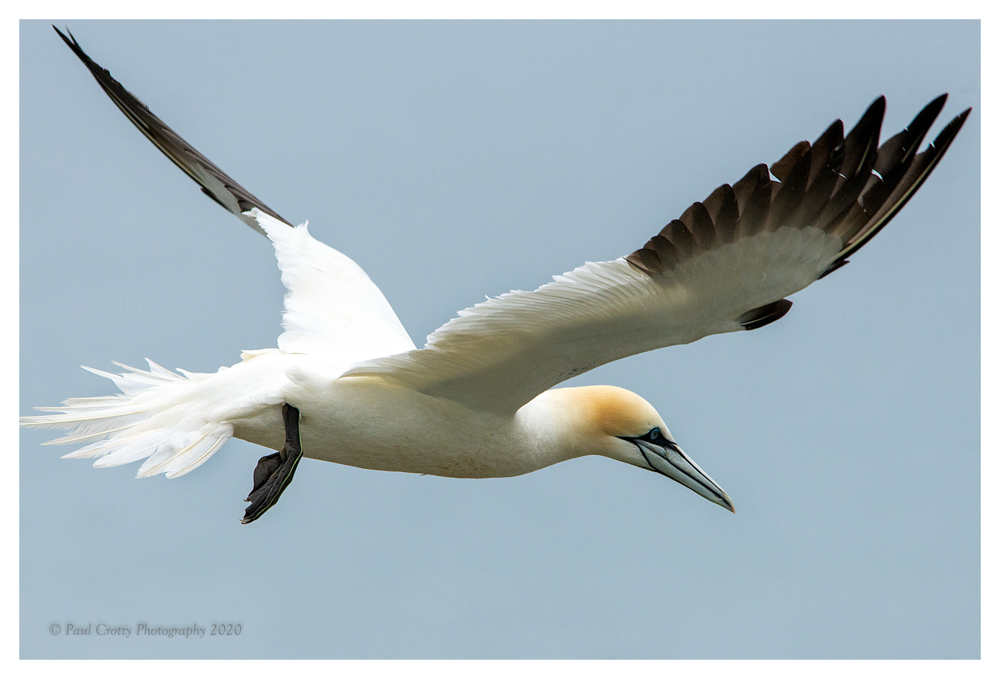 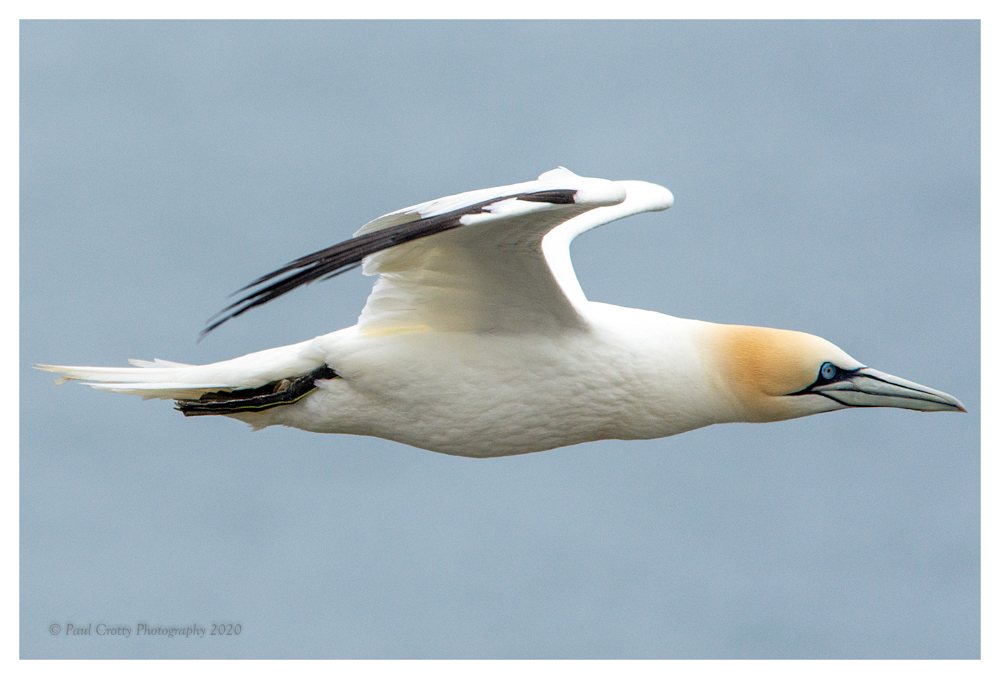 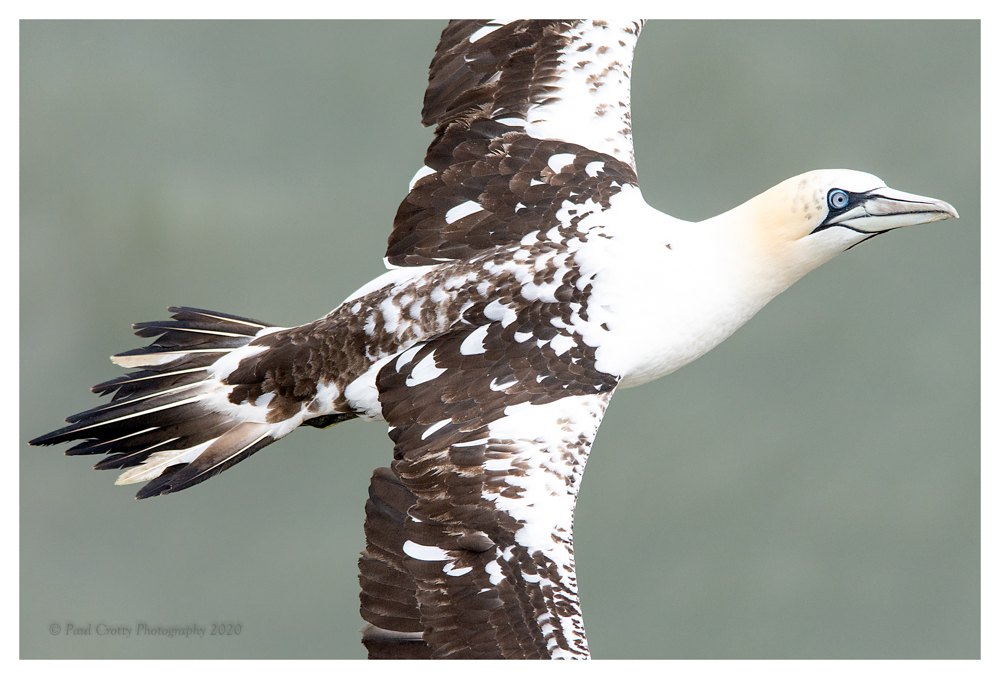 Above 3 shots of Gannets. The final one is a 2nd or 3rd year. 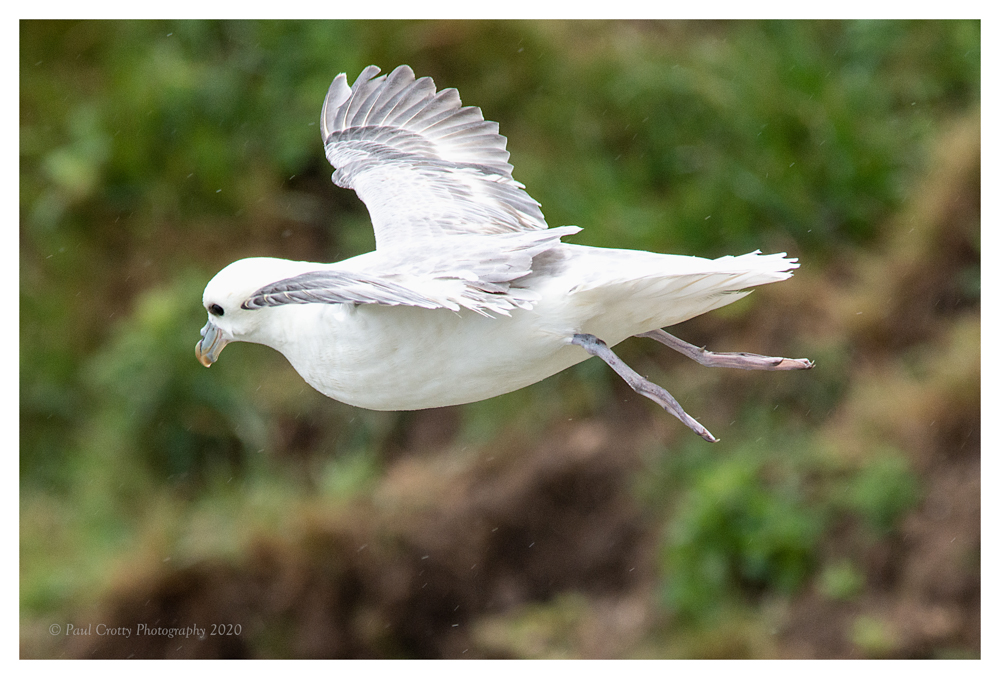 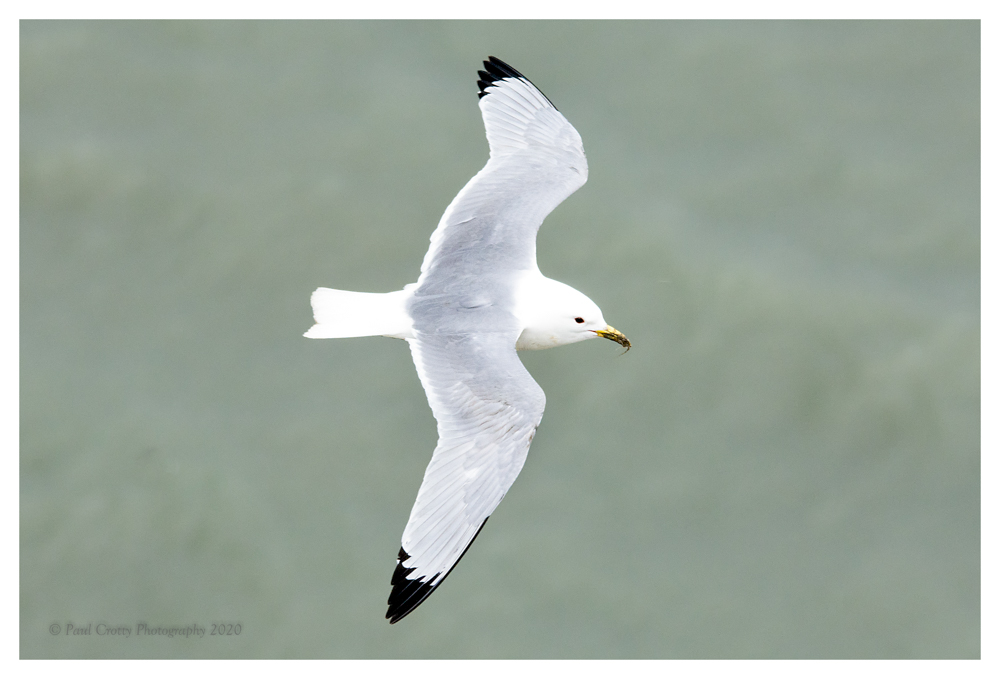 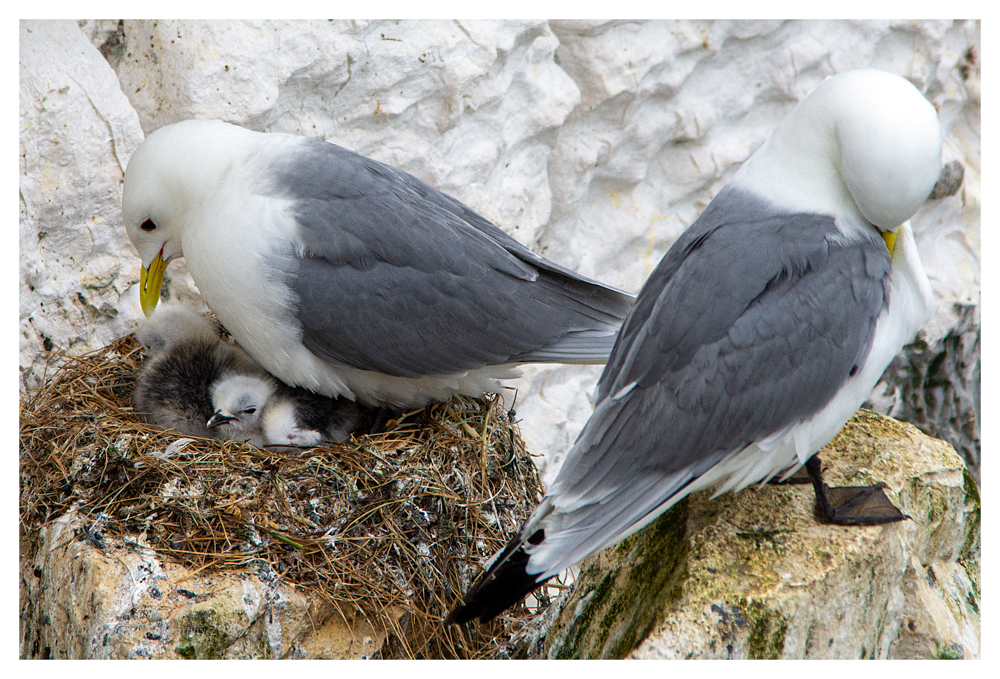 Above 2 images of Kittiwake. Note the chicks in the nest.

Below the iconic Puffin 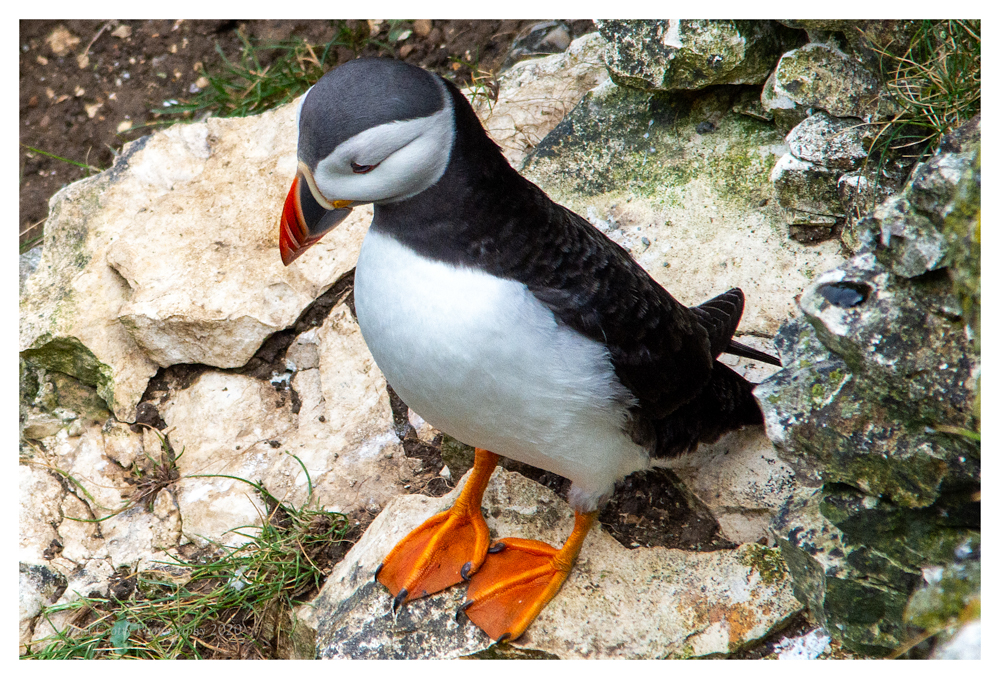 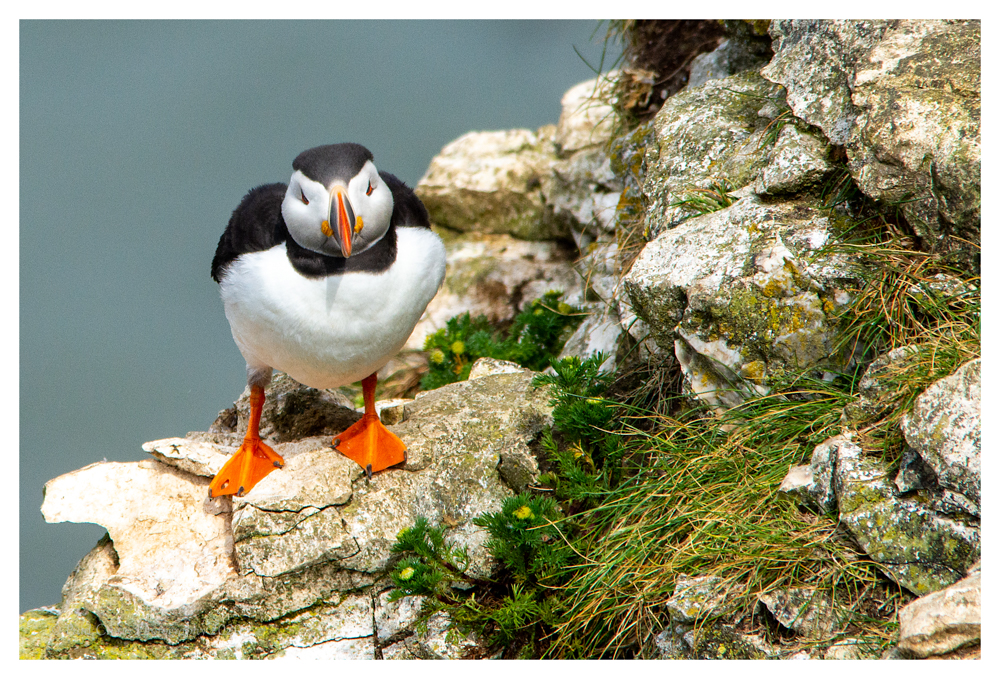 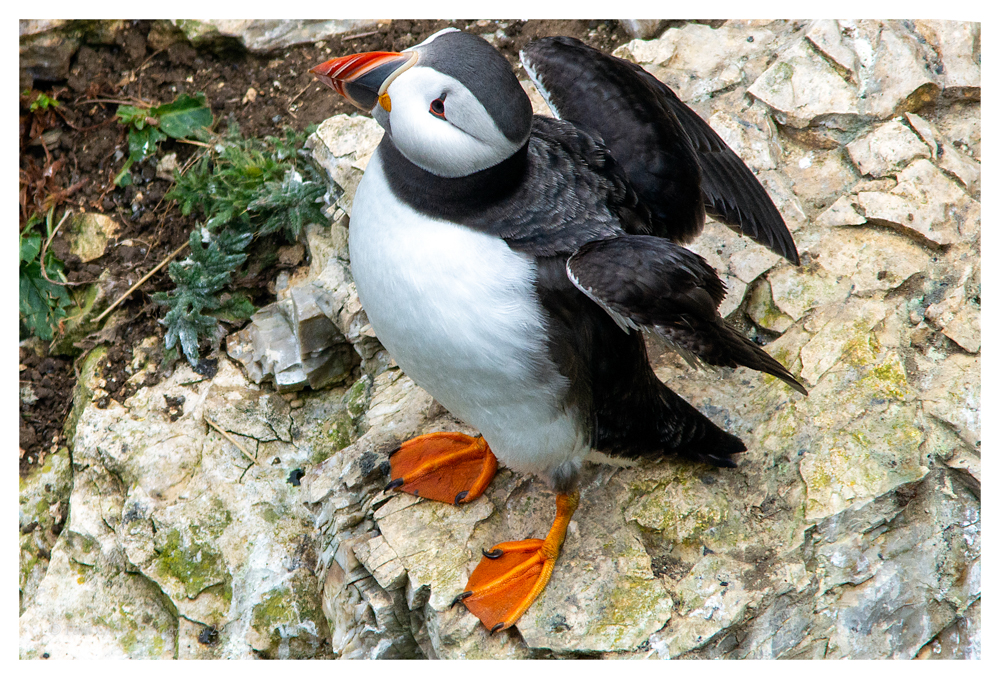 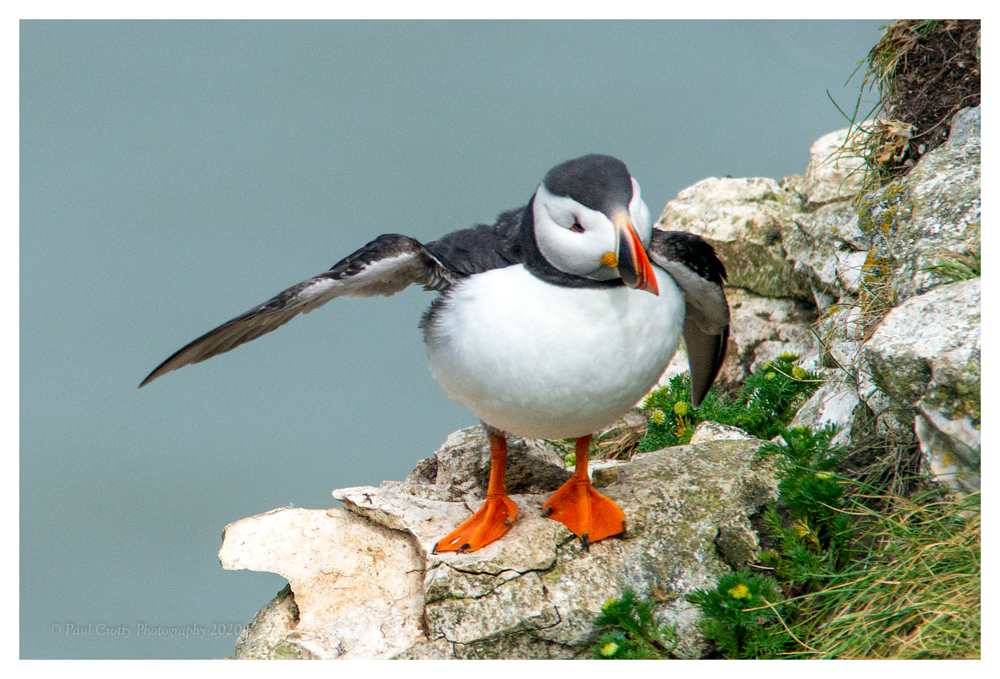 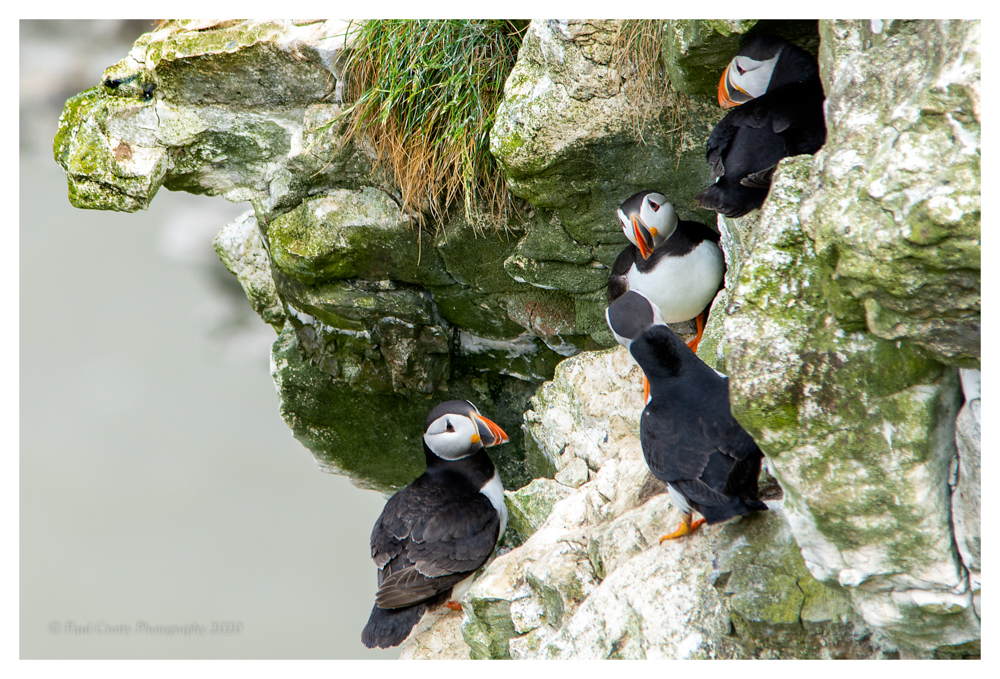 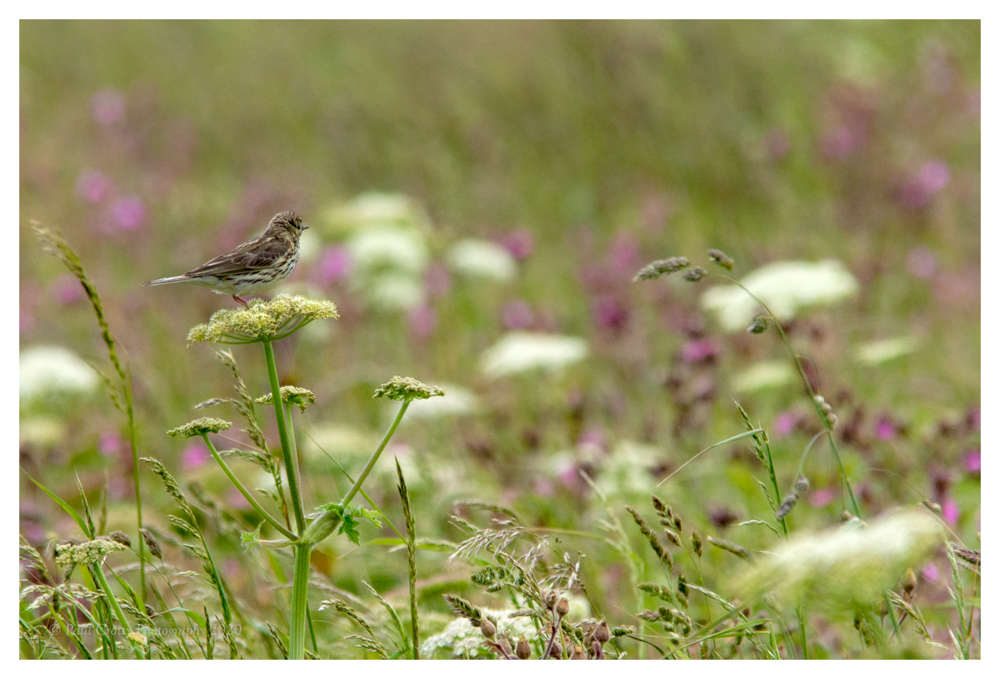 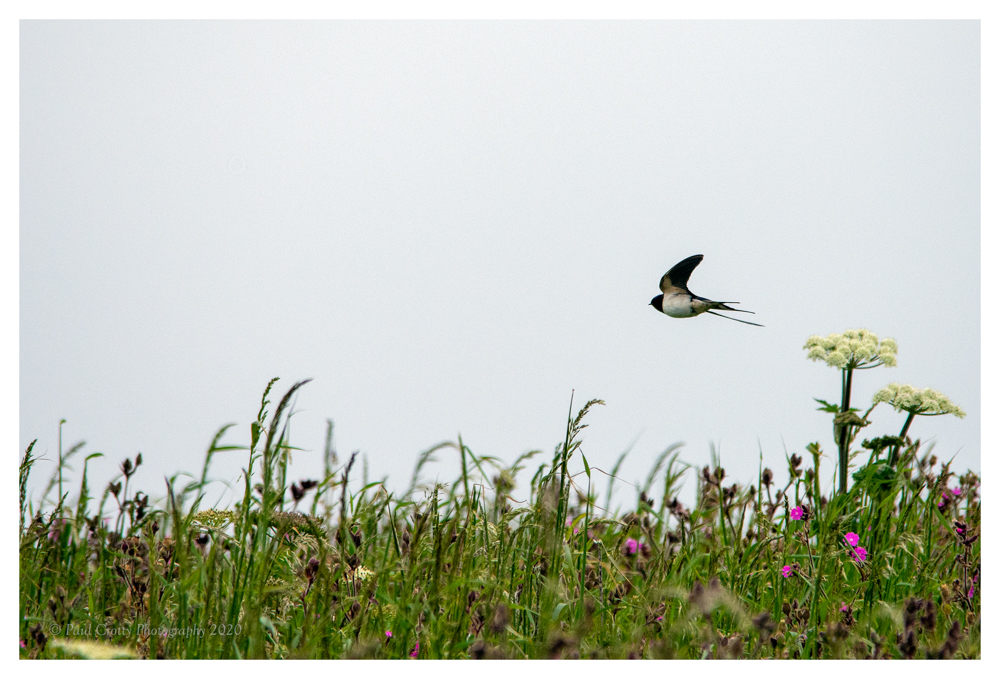