A break in the wet stormy weather gave me the opportunity to pay a day visit to Titchwell North Norfolk, which is only a two hour drive from Northampton if you leave at 6 am as I did. At 8.05 I arrived at the carpark, there were just a few other cars. 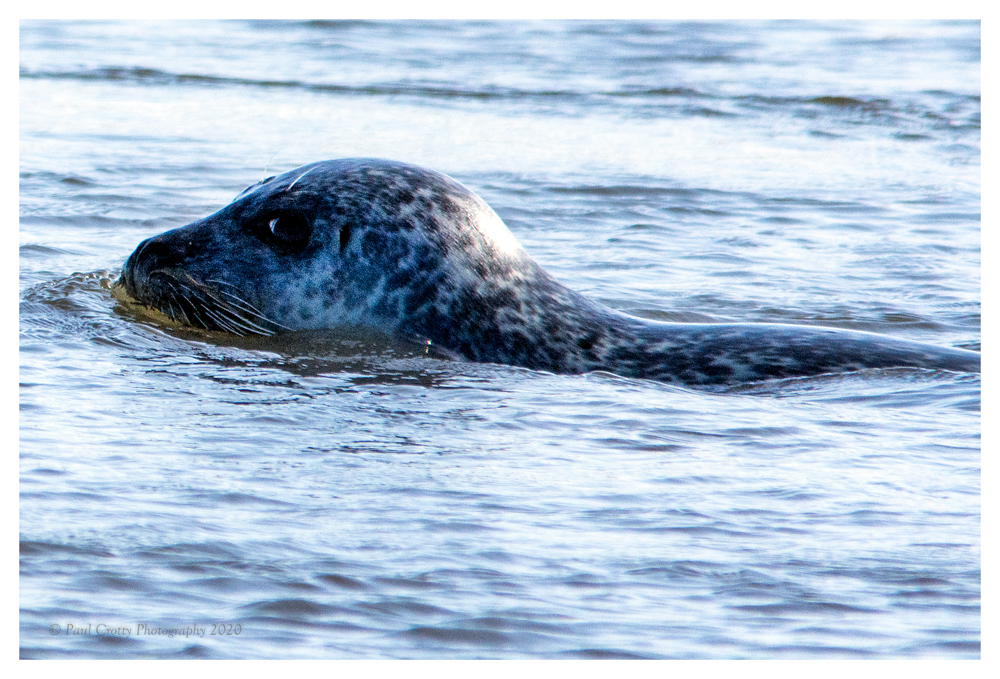 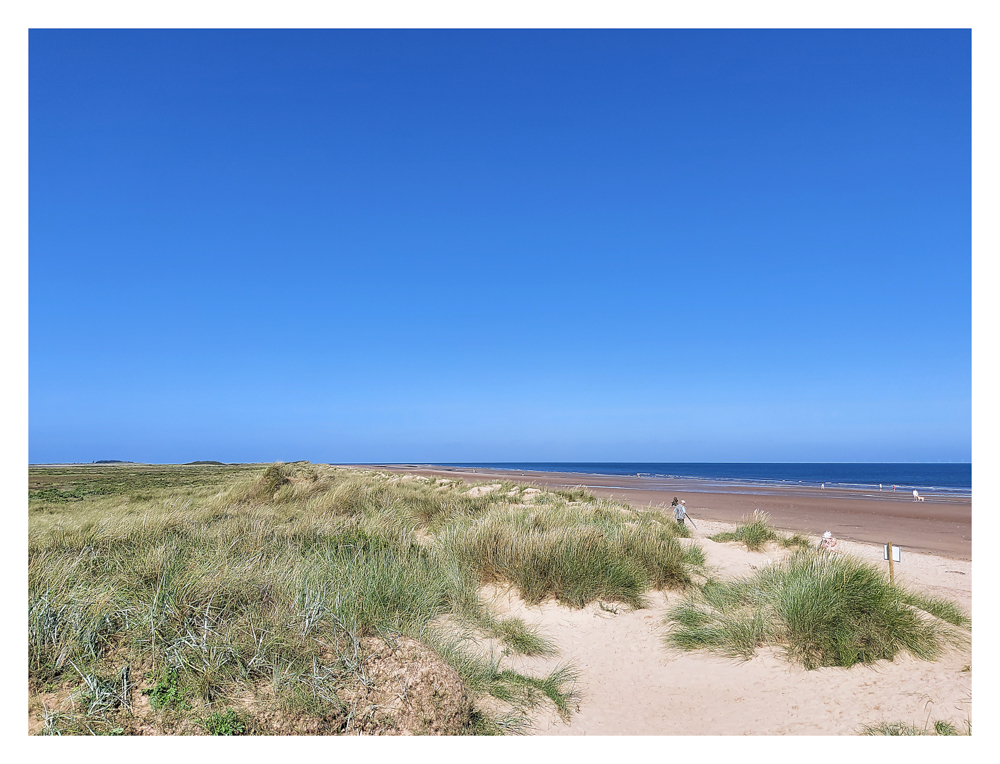 Titchwell Beach about 10.00am. You can see why people call it the Big Sky! 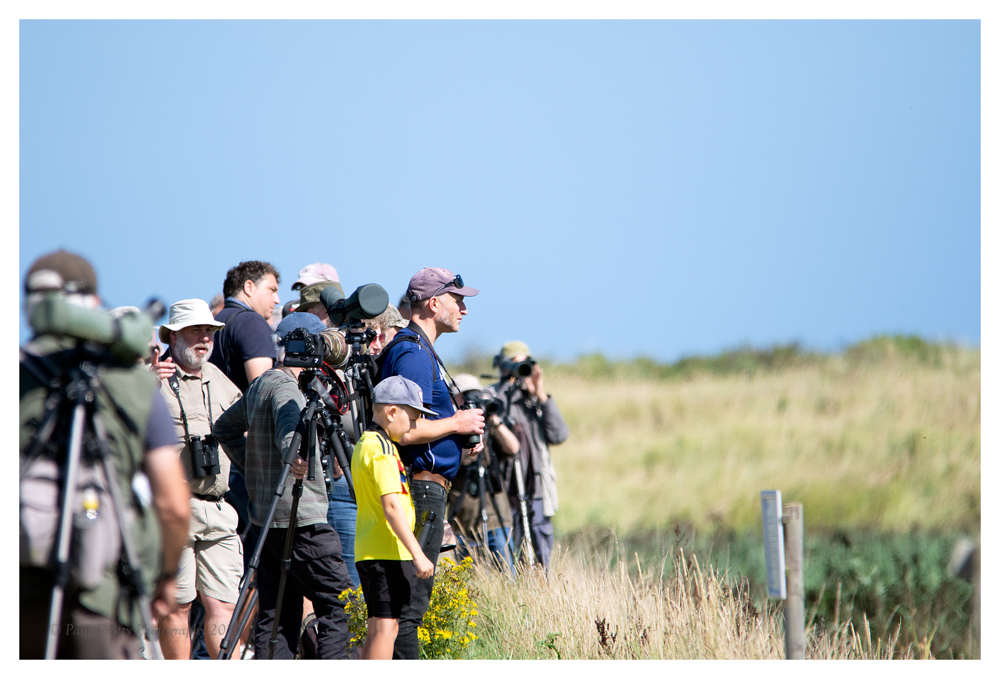 A waiting game for a Citrine Wagtail

Having loaded up the rucksack I set of towards the beach. Instantly it became obvious that bird activity was low and the first photo opportunity was a Dragonfly resting on a plant. The sky is clear of clouds and it is beginning to warm up even at 8.30. As I walk up the path towards the beach 1 kilometre away I scan the reeds and bushes, the sky and out across the marshes. Various gulls are there also a few Little Egrets and a Spoonbill. Suddenly a Heron comes into view.

Ahead I can see a group of people and it soon becomes obvious they are all pointing their scopes and cameras at a single spot. When I finally arrive at the gathering I discover that a Citrine Wagtail is present. The group is too large and close together so I decide not to get involved and move past them.

There really is not much about at this time perhaps when I return and the tide is out (which drains the lakes to reveal the mud flats) more waders will be present. The temperature is rising so stop and apply some factor 30 cream!

Small birds are flitting about moving from bush to bush up ahead. Once close enough one kindly lands on top of a bush close enough to me to allow a shot. they are Meadow Pipits.

Eventually I make it to the beach as I walk from between the dunes standing in front of me a fellow photographer from Northamptonshire who I see at Summer Leys LNR Mr. Ricky Sinfield, who I must say takes some incredible shots. The first rule of photography: You have to be there to get the shot.

After a brief chat to Ricky I decide to turn right and walk towards Brancaster in the hope that I may also see some Seals. I can see groups of birds on the shore line and hope that there may be something interesting there.

By this time is getting very warm, it is delightful to roam along the beach splashing through pools and searching for unusual shells and stones. I can hear a Ringed Plover calling but cannot see it. There it is, such small birds and it blends in with the beach colours. As I walk forward it moves with me. This carries on for about 100 yards running out of place to go it takes flight and goes back to where I first found it. I did manage to get some shots of it.

Now I am parallel to the groups of birds on the shore line so I slowly move towards them. Eventually I am close enough to try some shots. in the group are some Turnstones, Redshanks and Oystercatchers. Further along some Gulls (mostly Herring Gulls) in amongst them more Oystercatchers.

I am now at the Inlet between Titchwell and Brancaster beaches. There are just a few people on Brancaster beach, still too early for the families. A Grey seal suddenly surfaces, but too far away for any photos. It moves further inland along the creek. Then another seal this one closer allowing some shots. Off to the right I catch movement, two Great White Egrets and below them three seals resting on the bank.   Another flash of movement small, a little Pied Wagtail low down near the waters edge. People with a dog arrive they let the dog go into the water and the seals disappear! One surfaces briefly heading out towards open sea.  I wonder if a seal has ever attacked a swimming dog?

All this time I have been scanning the sky looking for a Marsh Harrier, nothing. Time to turn around and move back towards the reserve, walking slowly enjoying the wide open space and fresh air.

A kestrel appears hunting the edge of the marsh land near the beach. It is too far away to allow decent pictures, I take a few record shots.  Then another kestrel this one a little closer to me, and the Ringed Plover is still on the beach calling out.

High in the distance is a large bird, bigger than a gull and it is dark. My guess a Marsh Harrier. The photo is so poor it is difficult to be sure. It moves away not towards me. Now the families are beginning to appear on the beach.  Back at the entrance to the reserve I linger to enjoy the moment and see if anything flies over.

Now the tide is almost out and the mud flats drained there close a Little Egret and two Redshanks along with the inevitable Gulls. As I slowly make my way back numbers of families laden with bags, balls, surf boards are walking to the beach. It is clear that they have parked cars in the RSPB carpark!

I pass the group of ‘twitchers’ still watching for the Wagtail and still no room for me. A Great White Egret rises up in front of me to move location.  Now back at the centre I take the east trail towards Patsys Reed beds.  Lots and lots of Dragonflies here. Out on the pond a few ducks and a Swan a Shelduck feeding and a Female Red Crested Pochard.

I continue to walk along through the reed beds having seen Bearded Tits here on my last visit, this time nothing.  Still no close encounters of Marsh Harriers, one day! 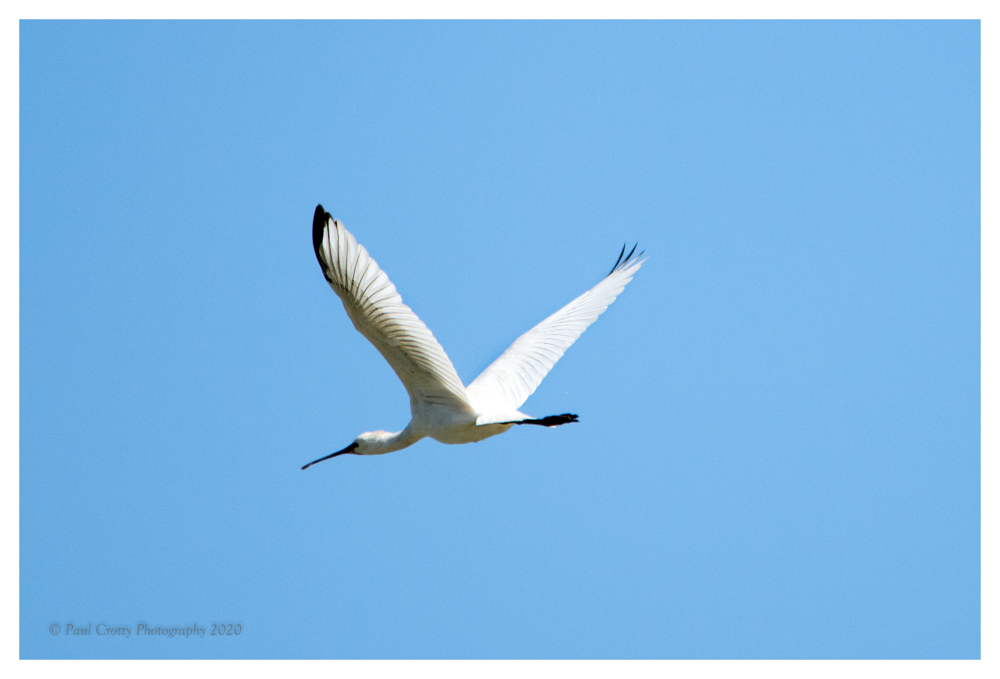 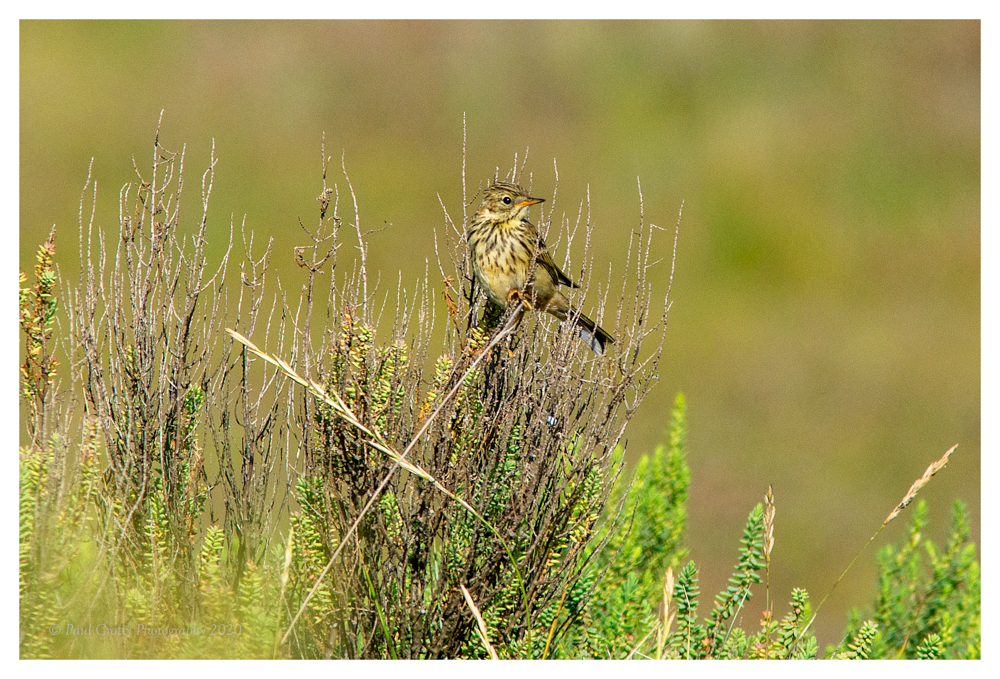 Slowly I return to the carpark and hear a Cettis Warbler but no sighting. Deep in the undergrowth near water a Muntjac Deer, but too hidden to get a good shot. Now back at the car I decide to move to Snettisham.  As I pass Hunstanton the cliff car park is totally full. I have never seen it like this, the Covid effect I guess.

The last time I visited Snettisham beach a huge storm blew in and I got some amazing photographs of the storm front, unlikely today. As I crest the dunes it is obvious that I would see few birds here, so I return the camera to the car and just go for a long walk.

As I am sitting just enjoying the views I reflect on reasons why I like this part of Norfolk. It reminds me in many ways of France or at least the outer edges of the Dordogne region. I suppose it is the nature of the villages and buildings in them.

Time to return home and wash the sand sun cream etc off me, have some supper and begin the process of editing the pictures. 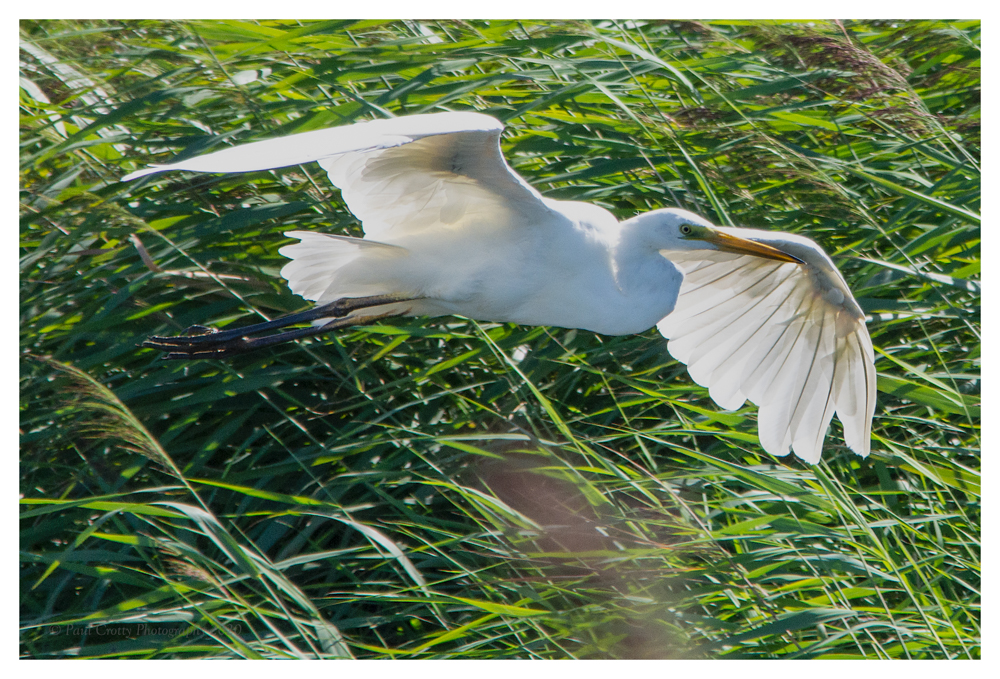 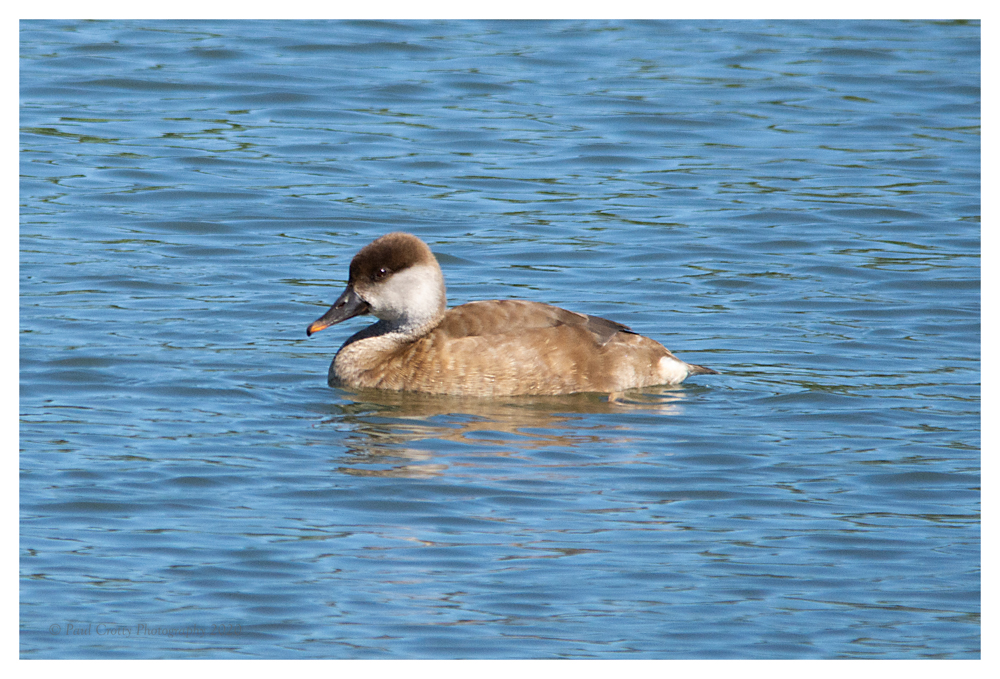 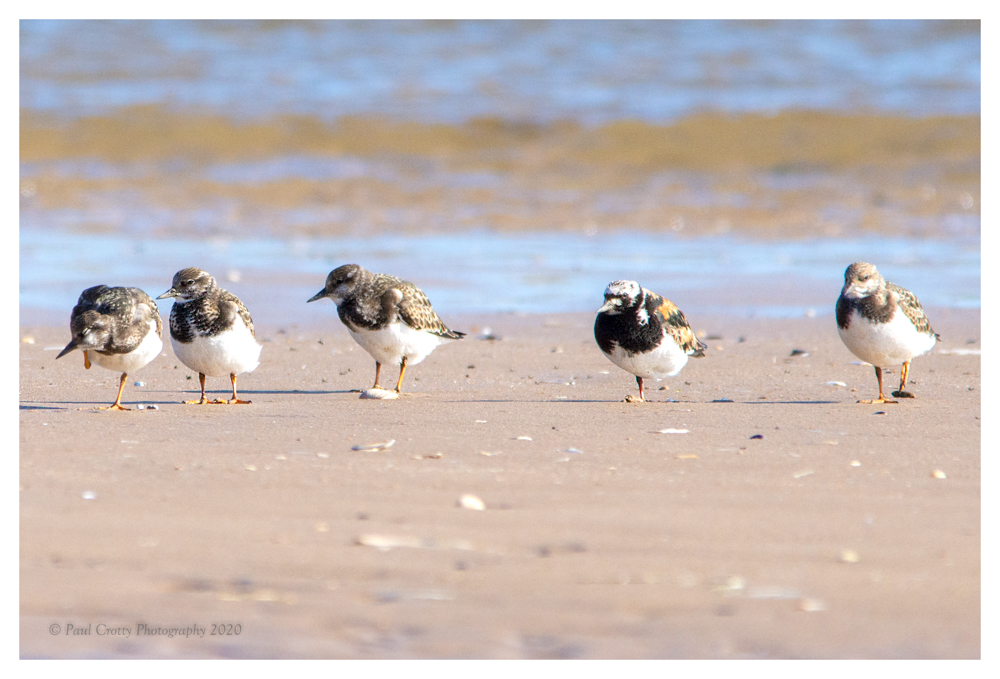 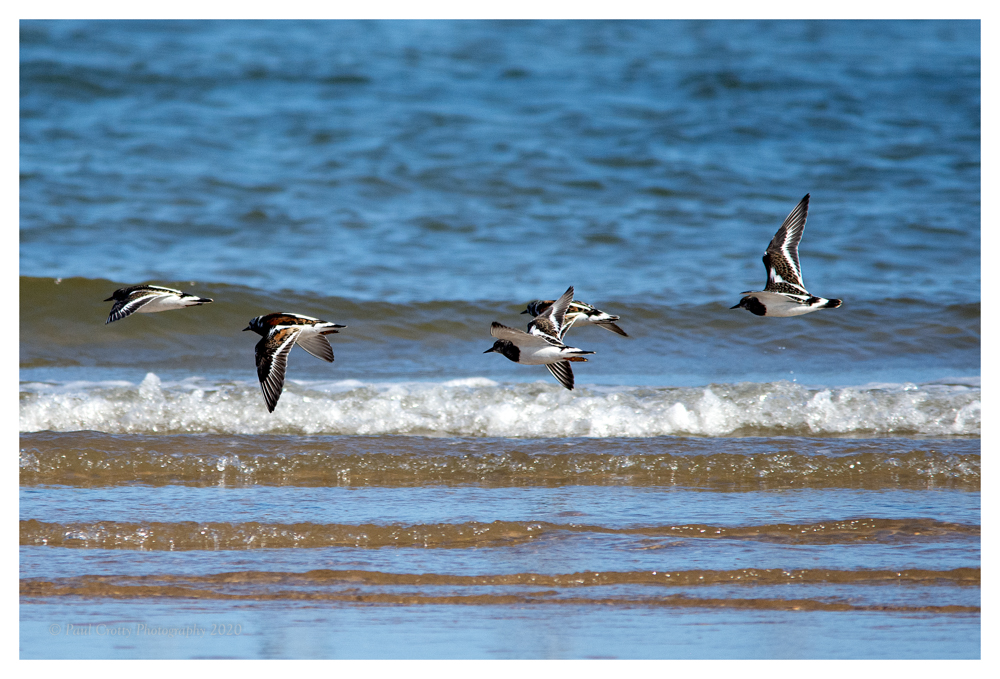 A feeling of desperation led me to decide to go to Titchwell in North Norfolk even though |I knew of the possibility of heavy showers. So, prepare equipment, clothing food and water the night before and set alarm for 6am. By 6.30 am setting off around the Northampton...

A totally irresponsible person walks near the nesting gulls, scaring and  causing them to rise up and create their own form of murmurationMay 20th 2020 Lockdown restrictions are eased. The weather is fantastic. I considered it safe to drive on my own to Norfolk and... 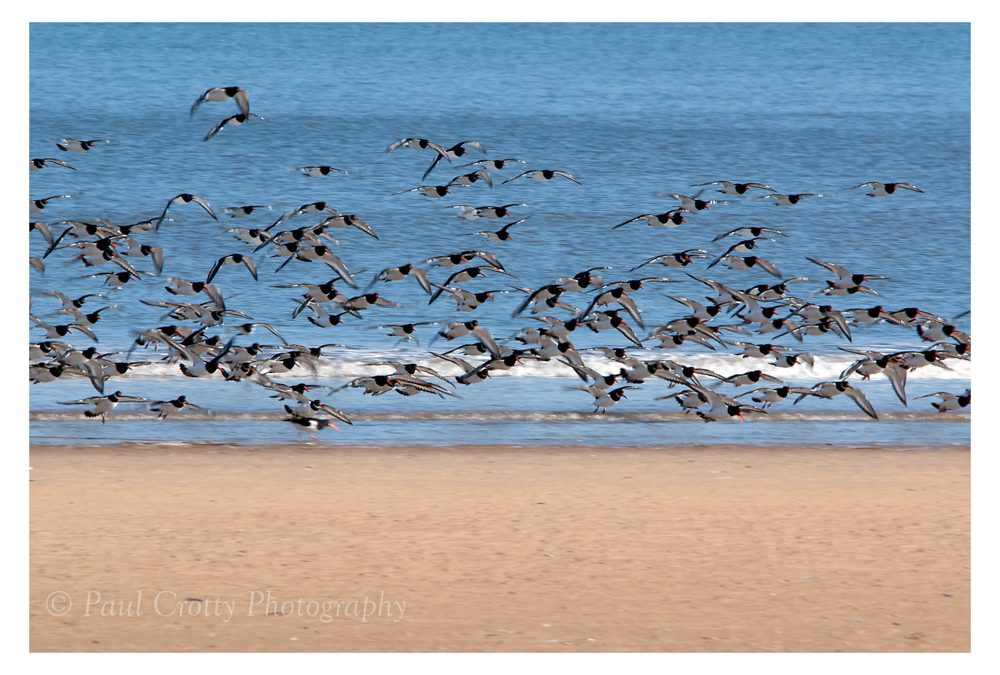 On 26th February 2019 I made my 1st visit to the RSPB reserve at Titchwell North Norfolk. The weather was amazing and had been for days previous. Clear blue sky and 17 degrees on the beach (in February).  ... 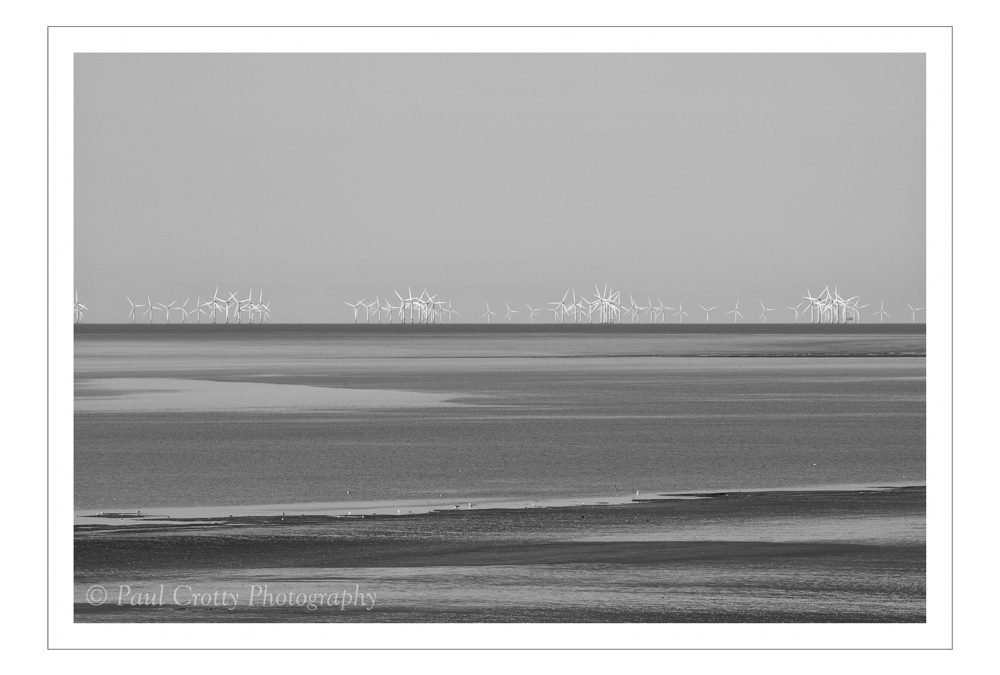 Although I love walking/climbing mountains and hills one of my favourite places to walk is the beaches around the Brancaster/Wells area of Norfolk.