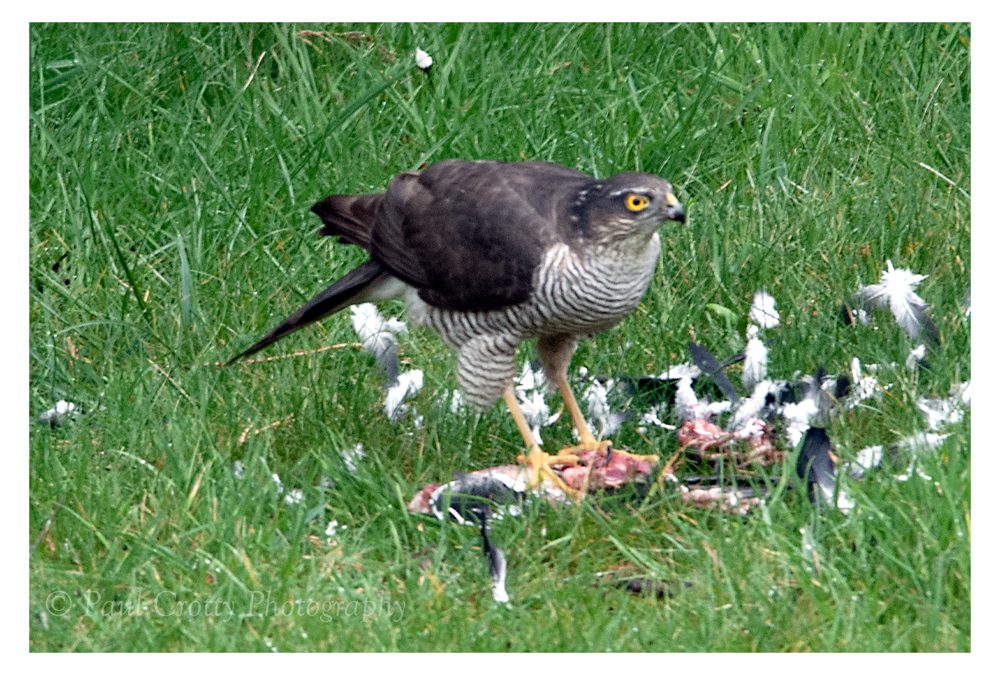 On the 6th March 2019 whislt preparing breakfast I realise that the bird in the garden is not the usual pigeon foraging. I realise it is in fact a Sparrowhawk with a kill,  and it was engrossed in eating its catch.

I rush upstairs to get my camera, luckily it had not flown away, and I begin shooting. It was quite grey outside and consequently exposure was a problem, the resulting fast shot pics were a bit grainy but acceptable. So, it had gone and left its kill in the bushes. I guess it was a Magpie by the size and colouring.

This was the day of my mothers cataract op so we had to depart for the hospital. Upon our return at 4.30 that afternoon there in the garden with the original kill was the Sparrowhawk again. It had come back to retrieve its kill and remembered where it left it!

I once again grabbed the camera and got more shots in slightly better light compared to the morning. During the shooting once again it flew off with the remains of its kill in its claws. After a few shots from the bedroom window I risked moving downstairs and outside, it did not move. So I was able to get more shots of the Sparrowhawk eating its kill. Feeling I may be able to closer I advanced up the garden. As I started to take more shots it flew off with its kill in its claws. Update:  Once again the Sparrowhawk was in the garden with a new kill. It remained eating for over half an hour (whilst we sat and had our lunch!)  This time I managed to get some video footage.